What’s a Duck Worth? Good weather for them at most grounds.

Only 1st and 2nd Grades got a start on Saturday, but it’s hard to be really angry about the rain after such terribly dry conditions over the past few months.

Nevertheless, two of our closest friends, Messrs Duckworth and Lewis had a busy time in both games. In 1st Grade, Wests’ aggressive batting before the rain saw their score advanced and just out of reach of the Gordon side, despite a brilliant century from Steve Colley. (Ironically, Gordon scored more runs in the same number of overs). In 2nd Grade, Gordon benefitted marginally from Messrs D and L, and, with a fantastic bowling and fielding performance, they managed to pull off a most convincing win.

The early Wests batting was good and the score rushed along before the rain brought a break in play. When play resumed, it continued to move along at a good rate, with one partnership dominating the innings. At the end of 34 overs, the Wests total was bumped up from 211 to 234 by the Duckworth-Lewis.

Gordon started badly but Steve Colley and Lachlan Barnsley added 114 to get them right back in the game. Nathan Doyle also made a handy contribution but it was just a bridge too far. Steve’s masterful 101* from 98 balls stood out as a great hand, but once again the Stags had fallen just short in the run chase. 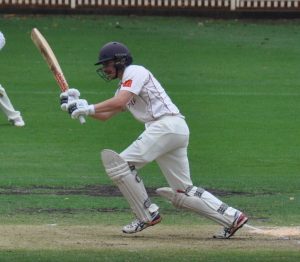 Josh Claridge during his innings against Wests

The first grade side however were able to finish in 6th place in the One day competition and will face off against Randwick Petersham on February 9 at Coogee Oval.
Gordon 8-221 (Steve Colley 101*, Lachlan Barnsley 58) lost to Western Suburbs 5-211 by the D-L system.

2nds started on time at Chatswood but were soon off due to the rain. A long break followed as the precipitation refused to stop. Finally, at around 3 o’clock the Gordon innings recommenced. After early wickets, Josh Claridge and Michael Roberts shared a handy partnership. Josh’s innings particularly was vital, ensuring that Gordon at least had a reasonable total. With the Duckworth-Lewis coming into play, Wests were set 129 to win from 21 overs.

The Gordon bowlers never let the Magpies into the game. Ashwin Premkumar was excellent, well supported by Ryan Meppem and the other bowlers. The fielding was also top class as Wests fell to be all out for 81. Top win!
Gordon 6-115 (Josh Claridge 42*, Michael Roberts 25) defeated Western Suburbs 81 (Ashwin Premkumar 4-20, Ryan Meppem 2-13). 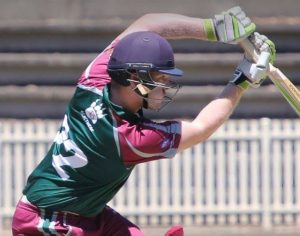 The Poidevin-Gray season completed their regular season with a comprehensive win over St George. This was their sixth win from as many matches and was set up by a magnificent 128* from Jamie Bekis. He brought his run tally in all games for the club this season to 692 at a tick under 50.

They now go into their Sixers Conference semi-final on February 2 as the leaders in their conference.