The irony of the movie 1917. Johnnie Moyes might have had a different opinion. 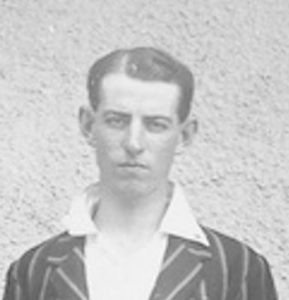 Johnnie Moyes before the war

If you haven’t seen the movie 1917, it is worth doing so, even if you wait till someone like Foxtel or Netflix show it on your TV. The movie is engrossing and extremely well shot with some of the most lifelike scenes ever shown of the First World War.

Without giving the ending away, two British soldiers are sent on a perilous mission to warn another British battalion that they are going into a trap and 1600 men would be slaughtered. The movie is based on the storytelling of the grandfather of the movie director who received a military cross for his bravery while despatching messages through the period of the Third Battle of Ypres which is also known well in Australian history as the Battle of Passchendaele.

The two soldiers are depicted finding their way through the battlegrounds of Ypres including their dangerous trip across “no man’s land” and the destroyed villages around the Belgian city. 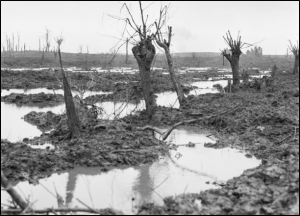 The battle scene at Passchendaele

There were four Gordon cricketers who fought in the Battle of Passchendaele on October 12, 1917 and throughout the movie I kept picturing them somehow surviving through the horrendous conditions they faced, and trying to compare it to their life at home in Chatswood. The four cricketers were Harry Watts, Dr. Gother Clarke, Harold Lilja and Johnnie Moyes.

Harry, Gother and Johnnie had been on the Western Front for several years while Harold had only arrived a few days before.

Harold was a twenty-three year old public accountant who lived at Nyara in Neridah Street, Chatswood. He had played sporadically for the club over the four seasons between 1909 and 1913, making only eighteen appearances in Third Grade for a total of 16 wickets. His 50 runs at 3.10 probably meant he was a career No. 11, whose bowling was his strength. He was still very much part of this young club and his limited games probably meant he made himself available when needed by the club.

After his arrival, Harold had spent time training at the AIF School in March and April 1917 before being sent to the front line in time for the Battle of Passchendaele. As he lined up with the rest of his battalion at 5.25am, looking ahead at the wind, rain and mud, he would have wondered what the training had all been for as this was not in the manual. 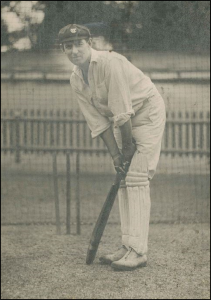 Johnnie Moyes after the war

Why the theme of saving 1600 British soldiers is ironic is that the Battle of Passchendaele was fought against the wishes of the Australian Command including General John Monash and the commander of the 48th Battalion, who would lead the offensive, 22-year-old, Major Johnnie Moyes.

The battlefields had become a quagmire, with the large craters formed by the explosions during two years of fighting becoming muddy pools which made traversing the ground an impossibility. Perhaps as an Englishman, General Haig had become inured to rain and did not believe it would impede his objective. Whatever the reasoning, against the wishes of both his own senior officers and the Australian commanders, he made one of the worst decisions of the war – forge ahead full steam.

Over 3000 Australians were lost that day making it one of the worst individual battle in terms of lives lost in the history of Australian warfare. Maybe the movie should have been about the decision to send the Australians into this battle rather than how they were trying to save the lives of the British soldiers, but I guess it wasn’t an Australian film.

As readers of these articles about our Gordon cricketers in World War 1 will know, Dr. Gother Clarke was killed that day, hit by a stray bomb that exploded just outside the medical clearing station where Gother was treating a soldier. Harry Watts and Harold Lilja were both badly wounded and eventually taken to the 3rd London General Hospital.

The disaster of the Battle of Passchendaele is probably summed up in nine words in a note written in Johnnie Moyes 48th Battalion diary for that day: “Almost every man who showed himself became a casualty”. Johnnie Moyes was in the middle of this battle and, as a company commander, was in a no-win situation. He had to follow the British command orders to reach the objective but he also had to do his best to protect his men. Johnnie was awarded a Military Cross for the role he played at Passchendaele. In a different approach to the award, Johnnie was recognised for his role over a six month period rather than a specific action within a battle. The citation for the award, which wasn’t published until June 1918, reads:

For consistent good work and devotion to duty during the last 6 months. He has rendered very valuable service to his battalion both as a Company Commander and as Senior Major. His work has been of the highest order and shows him to be a leader of great coolness and judgement. Period covered from 23rd September, 1917 to 25th February 1918. Johnnie’s leadership at Passchendaele under the most difficult conditions imaginable was the catalyst for the recognition for his work over the months following the battle. He didn’t wilt under the pressure of indescribable odds.

The 3,000 Australian deaths at the Battle of Passchendaele, put it on par with Fromelles as one of the worst days in Australian military history. A line from a famous poem by an English soldier, Siegfried Sassoon, who was there on that day, describes it best:

I died in Hell, (They called it Passchendaele).

Johnnie Moyes returned in November 1918 to Australia, and married Frederica Christensen in June 1919. Before joining Gordon, Johnnie had played for both South Australia and Victoria scoring a century on debut and was picked in the Australian Touring team to South Africa of 1914 that was cancelled due to the war. Johnnie played 7 seasons for Gordon and scored 1886 runs including an innings reported as one of the best ever in Sydney Grade cricket. He scored 218 in 83 minutes at Chatswood Oval against Central Cumberland in 1922 with 186 of those runs made up of 7 sixes and 36 fours. A number of the sixes finished on the train track. 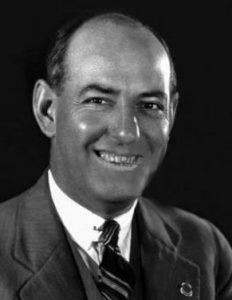 Johnnie as a broadcaster

Johnnie’s passion, however, was journalism and he worked for several newspapers from 1919 to 1941 including the Daily Telegraph, the Daily Guardian and was sporting editor of the Sun newspaper for 15 years. His career, however, was suspended for 4 years when he took command of the 7th Australian Battalion as a lieutenant colonel in the Second World War. While his Battalion remained in Australia during the war, being given the job of defending the country, they happened to be stationed in Darwin during the bombing by the Japanese in February 1942. As if Johnnie hadn’t seen enough battles at this stage of his life?

In 1949, Johnnie had begun broadcasting sporting sessions for the Australian Broadcasting Commission. In 1950-51 he covered his first Test series, against England and in 1955 he received a full-time contract. As a cricket broadcaster, he became a household name in Australia and New Zealand in the 1950s and early 1960s. Moyes’s ‘infectiously hysterical’ description of the last over of the tied Test between Australia and the West Indies in December 1960 has been replayed many times by popular request.

Moyes was awarded an M.B.E. in 1959 and died in January 1963 at the age of 70 at his Chatswood home. Only a few hours before his death Moyes had given a commentary through the A.B.C. on that days Sheffield Shield game between N.S.W. and S.A. at the Sydney Cricket Ground. Don Bradman, who had worked with him as a junior on the Sun, described him as ‘most considerate and helpful . . . a fine-living man’.

I am sure Johnnie would be interested to know that the mission of the Gordon District Cricket Club today reads as follows:

To build a strong club culture where every member reflects the Gordon Spirit in their behaviour both on and off the field. This includes having a strong work ethic, a courteous approach to all opponents, officials, volunteers and supporters and a team spirit built through a strong united bond. Our club leaders will set an example by reflecting the club’s values at all times and encourage all members to be aware of the community we represent and our long history of sacrifice and achievement.

Johnnie Moyes and all other Gordon cricketers who fought for their country, are an essential part of that long history of sacrifice and achievement and every day a Gordon team enters the field they should be aware of what some of our past players lived through to allow them that honour of representing the club.

1917 is a movie worth seeing, if a little ironic. I can see the four Gordon cricketers sitting in the theatre now…chuckling to themselves.