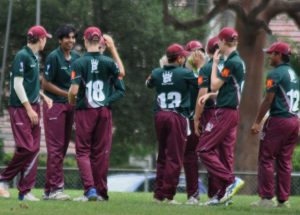 Gordon District Cricket Club continues to work closely with the very well supported and established Gordon Juniors Cricket Club. In his role as Junior Development Manager, Bob Thomas and coaches from the senior club are available to assist with grading teams as requested, along with providing coaches for the many junior sides.

The club also continues to provide off-season opportunities for talented north shore players in the U13 and U14 age groups. This area of development is called the ‘Academy’ and has been running in its current form for many seasons. The invitation only group is overseen by current First Grade Captain, Tym Crawford, who is assisted by other highly qualified First Grade players throughout designated dates in July and August.

Gordon is very heavily committed to providing a quality representative U16 team, which participates annually in the AW Green Shield Competition, played during each summer school holidays period. All twenty clubs in the Sydney Premier Cricket Competition are involved and the competition is of a very high standard. Application details are posted on the club’s website at the commencement of March for the following season. Each season Gordon receives well in excess of 100 applications and two initial trials are held to grade the players. An invitation only trial is then held for selected players, before a Green Shield squad is announced in early April. The squad then meets to train in the offseason and plays at least two trial games in the Term 3 school holidays.

The club is also firmly committed to a ‘Country Pathways Programme’ for talented young players from all over country NSW. This programme commences with two outstanding U16 players selected to represent the club in the AW Green Shield Competition. These two players are chosen based on their high-level representative performances, to complement the city based players in the squad.

Phase two of the ‘Country Pathways Programme’ is made available to players from the country who are completing their Higher School Certificate. Up to three outstanding players are chosen each season to play for the club and live together in club funded accommodation in Sydney. It is vitally important that these young players are supported away from the cricket field and the club works closely with parents to ensure a successful assimilation to city life for the boys.

For any further information required regarding any of the above Junior Development areas, please email Bob Thomas on thomasbob6@gmail.com