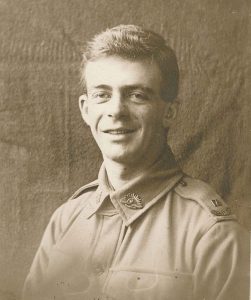 If you want a trivia question that no one is likely to answer, here it is.

Who was Don Bradman’s boyhood hero, who played Test Rugby and Test cricket for Australia?

The Don had stated many times that the one player he tried to emulate, not just for his batting style and amazing ability in the field but also for his renowned modesty was Johnny Taylor, who played 5 seasons with Gordon after the war starting in 1920.

With 5 senior first grade players from the start of last season not available for Gordon this coming 2020-21 season, maybe we need to look back to the 1920-21 season for some inspiration.

A look at our history shows that seven current or future Test and NSW cricketers joined Gordon after the war including Johnny. I would love to research why that happened, was it their concurrent trips to the 3rd London General Hospital during the war, or maybe some of them being part of the post war AIF cricket team? Whoever was chairman of the GDCC recruitment committee in 1920 needs a medal.

When Gordon historians talk about our great early players, the obvious names of Trumper, Macartney and Oldfield are always mentioned, but not many list Johnny Taylor amongst that elite group. If you want a combination of war hero, all-round sportsman and a man of exceptional character then you can’t go past Johnny. 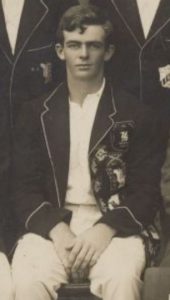 Johnny Taylor in his Newington blazer

Johnny Taylor was recognised as the most brilliant sportsman in the history of Newington College. He played in the cricket 1st XI from 1909, at the age of fourteen, until 1915, scoring twelve centuries and three double centuries; and in the Combined GPS 1st XI for five years, two as Captain. He played Sheffield Shield cricket for NSW in 1914–15 while still at school. He played in the Rugby 1st XV for five years and in the Combined GPS 1st XV for four. He shot in the Rifle Team for four years and was a member of the Athletics team for five. He was awarded Triple Colours five times, a feat unique in Newington’s history. Despite his successes he was very popular due to his friendliness and as his legendary modesty.

Johnny enlisted with the AIF on 8 October, 1916 with his application form stating his age as 20 years and 11/12. With his Rifle Team experience Johnny was recruited to the 1st Field Artillery Brigade as a gunner.

Johnny left Australia in February 1917, however didn’t get to the front line in France until November 1917, having undergone training at the British Royal School of Artillery at Lark Hill near Stonehenge. It was also because the England cricket establishment were missing their cricket so much, they arranged for several matches to be played at Lords in 1917 between an England side and soldiers from Australia, India and South Africa. Charlie Macartney being a current Test player at the time must have known Johnny was in London and had him recruited to the team. 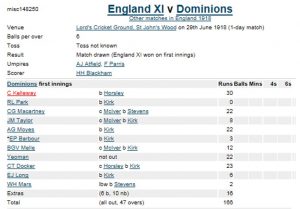 The Dominions team had Gordon players Charlie Kelleway opening the batting and Macartney, Taylor and Moyes at 3, 4 and 5 in the order. Maybe that was where the recruitment work started?

I am sure Johnny would have thought “what might have been” as his delayed arrival to the front line, due to the cricket matches, meant he missed the Battle of Passchendaele by one week where there were 13,000 Allied casualties in what is known as Australia’s worst day in battle. The 1st Division lost 2,448 men that day in October 1917.

Johnny then spent the next five months with the 1st Division in the Messines area of Belgium. In March 1918, the 1st Division were sent to the Amiens area to defend against the Spring offensive and on March 26, Johnny was badly wounded in his right knee from enemy fire. After a short stay in a French hospital, his knee became septic and he was returned to the 3rd London General Hospital. His injury was so severe he remained in London until 1st November 2018, when he was returned to his unit in Amiens. 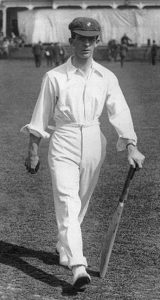 In March 1919, Johnny was transferred to the AIF headquarters in Belgium before travelling back to London in May to join the AIF Cricket Team tour of the UK. He followed this tour with another tour of South Africa from September to December 1919. The team also played three matches in Australia before being abandoned in 1920.

Following the war, the AIF administration had the unenviable task of transporting the remaining soldiers back home. There simply weren’t enough ships available, as the 200,000 remaining troops had all arrived progressively over the preceding four years. The basic rule was that the early arrivals would get the first transport available and the balance would go home, based on their length of time in the war. There were some exceptions, however, like necessary professions such as doctors and nurses who were given early transport. Those who were wounded, of course, were also given preferential treatment. The planning, though, meant that most of 1919 would be needed to move the troops who were naturally very keen to return home to their loved ones. But at least they were safe.

While the majority of the Gordon cricketers who went to war, never played cricket again, there were several who not only continued playing but became household names in our history. These were players such as Charlie Macartney, Charlie Kelleway, Bert Oldfield, Jack Prowse, Johnny Taylor, Rupert Ellsmore, Harry Watts, Johnnie Moyes, Austin Diamond and Syd Trumper. 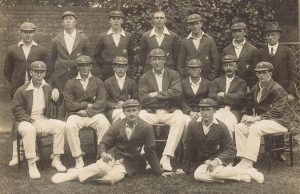 The Australian team in 1920 including Taylor, Oldfield, Macartney and Smith

The annual report for the 1919/20 season proudly announced that eight war veterans had played in first grade in the final match of that season.

Johnny Taylor arrived at Chatswood for the start of the 1920-21 season and played nine games with the Gordon Club over the next two seasons in between his Test and NSW commitments which included five Tests against England. Three Gordon cricketers Taylor, Macartney and Oldfield played in that series and the club secretary, Syd Smith, was the team manager.

From 1922 to 1928, Johnny spent six seasons at Sydney University due to the studies he was undertaking at the university.

While Johnny was taking the cricket and rugby world by storm over this period, he was constantly hampered by his war injuries and spent long periods in hospital.

Overall, Johnny scored 1,839 runs for Gordon at an average of 42 including scores of 141 and 140 in his final two seasons. Between 1920 and 1926, he played twenty Test matches for Australia and 135 First Class matches. He also played two Rugby Tests with the Wallabies in 1922. Imagine what he might have achieved if playing on two good legs?

Johnny graduated from the University of Sydney with a Bachelor of Dental Surgery in 1926 and managed a dental practice in Macquarie Street, Sydney. He was very proud of his school heritage and remained involved in various capacities with Newington College. In November 2013, the College named their Sports Centre after him. Johnny remained in the Gordon area after he retired and died in Turramurra in May 1971 at the age of seventy-five.

While the Gordon first grade team taking the field for the first match of the 2020/21 season will be different to previous years, let’s hope there will be another Johnny Taylor ready to make their mark for Gordon. Although the 100th anniversary of the end of the First World War has produced many articles, documentaries, books and films about the carnage and horror of the fighting, it is still difficult to comprehend the sacrifices paid or the zeal with which the men initially went to fight. Nevertheless, to honour their memory, the high standards of duty, commitment and perseverance which they set, the Gordon players continuing to take the field in their place since then can emulate their spirit so that their deaths and injuries will never be forgotten.