Bowlers Revenge against the Ghosts 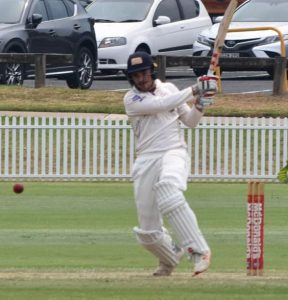 Josh Porter during his excellent innings

A good day’s work by most teams. Unlike last week, in most games the ball dominated the bat with Jackson Saggers (2nds), Dan Stickland (3rds) and Dave Monaghan (5ths) all taking five wickets.

The highlight of the day though, was undoubtedly in 4th Grade. At 6-45, you’re probably not thinking you’ll be able to declare later at 9-331 and have the opposition 3-24. Well, that’s what happened, with Josh Porter and Rahul Krishna sharing a wonderful partnership of 176 to rescue the Stags and ultimately put them into a very strong position. Josh’s 153 was a brilliant, powerful effort. 2nds and 5ths have already won on the first innings after Day 1.

For the record, the partnership is the third highest in 4th grade for the 7th wicket. Rob Campbell and Shayne Lin put together 217 in 2003 and in the same season the legendary Marty Reynolds and Matt Selby put on 183. 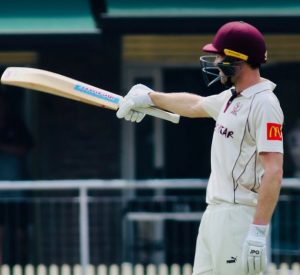 Tym Crawford acknowledges his 50 on Saturday

Gordon won the toss and batted at Chatswood on a hard, grassy wicket that gave the bowlers some encouragement. An early wicket fell before Axel Cahlin and Steve Colley took the score to 59 before the former was out for 24. Steve and Harry Evans both got starts but were then dismissed. Tym Crawford continued his good form with a classy 54. Lachlan Barnsley then dug in, sharing small partnerships with Glenn Winsor and Scott O’Brien. Nathan Doyle also contributed a very handy 21* but the final score of 246 looked a bit short.

Charlie Stobo got the Ghosts’ innings off badly by taking a wicket with the first ball. However, the runs began to flow and the score mounted quickly. It looked good for Campbelltown but in the final few overs, the Gordon bowlers came back to snare a couple of wickets and leave the game evenly poised.

An intriguing first session in store next week. 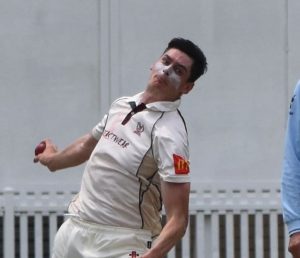 Campbelltown got off to a great start at Raby. The openers added 66 in good time before Ryan Meppem finally broke through. From there, the Gordon bowlers asserted themselves. Matt Keevers took a wicket and then Jackson Saggers ripped through the middle order, taking three. Another to Ashwin Premkumar and they were in more than a modicum of difficulty at 7-98. Things didn’t get any better as Jackson took his fifth and Ryan finished the job. The Ghosts were all out for 121 – a top effort from the Stags bowlers.

In reply, after an early wicket, Dom Thomson and Darren Jayasekera shared a strong partnership. Both made excellent contributions and although both were dismissed before the first innings win was achieved, there was little risk of a twist in the innings. Josh Claridge and Michael Roberts kept the score mounting briskly (the latter’s innings described in the media as a ‘superb cameo’ along with his five catches). Gordon finished on 5-182 and the game is set up for next week. 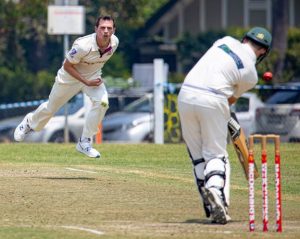 Thirds lost the toss and bowled at Killara. Dan Stickland took two wickets immediately to have CC 2-11. A handy partnership ensured before Dan Chillingworth chimed in with a brace. Manus Chauhan continued the job, taking two quick ones and Austyn Nugent took his first. After the tea break, Dan Stickland continued to take wickets and Campbelltown were all out for 135 with Dan’s five for the highlight.

After losing a wicket immediately, Liam McElduff and Michael Fletcher shared a good partnership. Liam scored 49 and, at 2-61, Gordon was in the dominant position. However, three late wickets fell as only Dan Chillingworth was able to hold things together. 5-88 was the final score and a very interesting first hour next week in store. 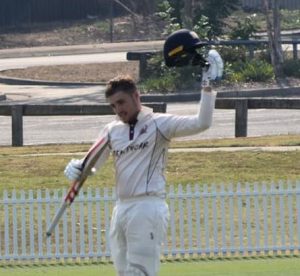 Fourths won the toss and batted. They were in immediate trouble and at 5-30, things looked very grim. The sixth wicket fell at 45 before Josh Porter and Rahul Krishna came together to right the ship. And, wow! What a ‘righting’ they performed! They took the score to 221 before Rahul was dismissed. Josh completed a punishing century and kicked on to 153 – a fantastic performance. With Lachie Burrows chipping in with 30*, Gordon were able to declare at 9-331 and ten overs to have a bowl. Kartik Khetarpaul made sure that the time was put to good use, taking three wickets and leaving Gordon well on top over the week.

A great performance, particularly by Josh and Rahul.

Fifths lost the toss at Beauchamp Park and were bowling on a hard, fast wicket. Karan Tiwari struck a couple of times and the Ghosts were in early trouble. He took three and Prashan Seneviratne one before skipper Dave Monaghan came on. He quickly took two wickets in two balls and then another in the next over and Campbelltown were in real trouble at 7-54. Dave continued his demolition job as Campbelltown-Camden were all out for 80. Dave’s figures? 10.1-2-20-5. Enough said. 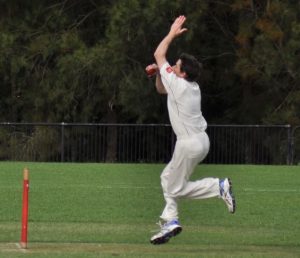 The Gordon openers got their chase off to a great start. Nick Astridge and Riley Behlevanas put on 96 before both were dismissed trying to push the run rate. Cam Hewitt and Shiv Rana then really put the foot down, adding 114 in very quick time. Cam played some imperious lofted off drives while Shiv was at his belligerent best.

Gordon were able to declare with 8 over left. In that time, Shiv took an important wicket to have the Stags well on top. A big first session needed next Saturday, but an excellent day’s work.
Gordon 3 dec 210 (Cam Hewitt 61, Nick Astridge 56, Shiv Rana 49*, Riley Behlevanas 33) vs Campbelltown-Camden 80 (Dave Monaghan 5-20, Karan Tiwari 3-10) and 1-43.

The Colts are doing well in their Sunday game. After rain stopped play at tea, they have Eastern Suburbs 8-129 at Waverley Oval. Hopefully, a full day next Sunday.
Stop Press – 1st Grade went down to Sydney in their T20 game at Drummoyne.