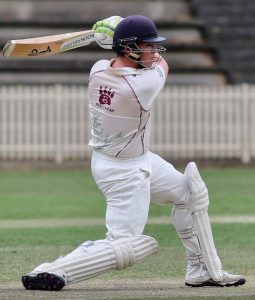 “It’s a Batsman’s Game!” the bowlers shout. Well, from the looks of the weekend, just around now they may have a point. Lots of runs while wickets were certainly hard to come by. A satisfactory day for the Stags, with three wins, two draws and a loss. Some great scores, particularly from Jamie Bekis (165*) and Josh Claridge (77*) in 2nds, Nick Astridge (142*) in Colts and Darren Jayasekera (77) in 3rds.

Randwick-Petersham got off to a solid start, moving into the fifties before two wickets fell. From there, the scoring rate was reasonable as Gordon struggled hard on a very good wicket and fast outfield. At 5-205 it was anyone’s game, with Glenn Winsor the best of the bowlers. Two wickets later, they still needed 72 with three wickets remaining. However, the Randy-Petes batsmen slowly got on top and eventually won with a couple of overs to spare. The Stags toiled hard but perhaps will rue the number of starts the batsmen got last week without anyone going on to a big score. 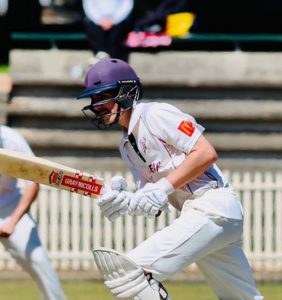 Dom Thomson and Ryan Tullia took the score to 41 before Dom was dismissed. Ryan and Jamie Bekis then added 54 and the Stags were in a solid position. Wickets were the key as the deck was very good and the outfield lightning.
From there, it was all Gordon. Jamie played imperiously, well supported by Josh Claridge, and the two of them took the game completely away from Randwick-Petersham. They added an unbeaten 218 and the required total was passed around tea time.
A terrific performance – Jamie’s 165* included 29 fours and a six, while Josh’s 77* with 11 fours was also a most important innings.

Michael Fletcher and Liam McElduff continued to bat well, taking the score to 91 before the latter was dismissed. Michael was out for a solid 34 with the score at 134 but Darren Jayasekera , at his belligerent best, and Dan Chillingworth, added the necessary runs to see the Stags home. Darren finished with an excellent 77, being dismissed after the total was reached while Dan finished on 23*.
Another very good win for the 3rds – 3 from 3 is a great start to the season!

4th Grade (over the week score: Gordon 8-289 vs Randwick-Petersham)

After Gordon batted on for a couple of overs, Randwick-Petersham got off to a steady start, moving to 2-71 from 26 overs. Rahul Krishna then took two wickets and the Stags were on top at 4-105. A good partnership followed before Kartik Khetarpaul struck. A short while later, he took another two in two balls and the pendulum had swung firmly in Gordon’s favour. Swings and roundabouts as another partnership took R-P to 7-230. 69 runs needed from 11 overs. Sam Schembri-Green then took another two and the Stags had 5 overs to take the final wicket. Alas, it was not forthcoming as Randwick-Petersham held on to finish at 9-260. An exciting draw with some good fighting cricket from both sides.

5th Grade (over the week score: Gordon 8-272 vs Randwick-Petersham)

Gordon batted on, taking the score to 8-314 before declaring. They then took an early wicket and further wickets fell as Randwick-Petersham sat at 4-69 at tea. After the break, a couple more wickets fell and it was clear that the Gordon total was not going to be reached. Unfortunately, it was very hard work breaking through on a good batting wicket and Randwick-Petersham finished at 6-186. A disappointing result after it had looked pretty good around tea time.

Colts (over the week score: Gordon 0-37 vs Randwick-Petersham Green 175)

It was important that Gordon didn’t lose any early wickets and so it proved with Nick Astridge and Nick Woodward taking the score to 80 before the latter was out. Another wicket followed directly but Nick Astridge and Felix Booth made sure that nothing untoward would happen. They batted exceptionally well, passing the Randy-Petes score and pressing on. Nick completed a fine undefeated century while Felix finished on 52*. Gordon declared at tea, hoping for an unlikely outright. The Randy-Petes batsmen got their heads down and the game was called early.
An excellent win for the Stags with Nick’s big ton the highlight.

Over many years we have been able to supply photos of the various matches on Saturdays through the excellent efforts of a team of photographers. We have been doing this for over 15 years now and circumstances have meant the existing group cant get to games every week. If there are any keen photographers out there within the GDCC community you would be most welcome to send us your photos of the players at our matches for display in the weekend wrap and other stories. You just need a zoom lens on your camera and a good eye . If you can help, contact the webmaster at paulscricket@gmail.com