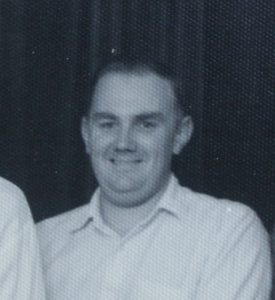 John Morrison in his playing days

John Morrison began his long association with Gordon in his primary school days when he often went to Chatswood Oval from his home nearby.  A few years later, as a young teenager, he attended the coaching classes introduced at the Oval in the mid 1940s by Harry Crow and Jack Prowse.  Soon, somewhat unusually for a schoolboy, he came to know a number of the First Grade players. John could recount vivid memories of watching such players as Bert Oldfield, Ginty Lush, Ray Robinson, and Sid Carroll.

His long playing career of 21 consecutive seasons began in 1949.  In addition to games in First Grade in the 1950s, highlights included playing in premiership-winning teams in three consecutive seasons.  This sequence began with the Fourth Grade team in 1958-59.

He maintained his good form in Second Grade in the following season, scoring 424 runs at 47.11 (five fifties in ten innings).  Not many Gordon players can say that their average was over 44 in three consecutive seasons.  In the remaining eight years of his career, John was captain of the Second and Fourth Grade teams, each for four seasons.

John served on the Club’s General Committee for 19 seasons including 12 after his playing days were over.  During this period he was the Ground Officer, not only supervising the work of the groundsman, but being responsible for maintaining good relations with Willoughby Council aldermen and staff, and obtaining their assistance at the Oval when required.

For three seasons during this time, the groundsman was Peter Leroy who later became well-known as the long-serving head groundsman at the Sydney Cricket Ground.  John’s commitment to this role was underlined in the 1980-81 Annual Report which commented that ‘John does a tremendous amount of work as Ground Officer.’  It was during this season that the Willoughby Council honoured him as its Citizen of the Year.

John continued to take a keen interest in the Club and regularly attended Annual General Meetings and watched matches at Chatswood Oval on many occasions. John was a very popular and respected Gordon man for a very long time and his outstanding service, on and off the field, was recognised by his election as a Life Member (No. 28) in 1975.

John was a much loved member of the Gordon cricket community and was heavily involved in the social aspects of the club, serving on the social committee during the many years of his association. This included arranging dozens of trips which contributed to the camaraderie within the club and the building of life long friendships.

John called me a few months ago to thank me for writing about our past members particularly those who fought in both the World Wars and at the time I told him I was just the storyteller and the players themselves were the ones to thank.

John is now the one to thank for his role in adding to the rich history of the Gordon District Cricket Club. He will be greatly missed.