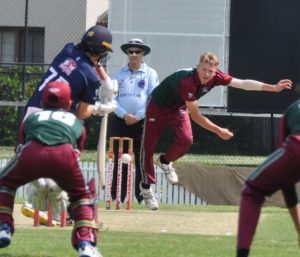 Bryce in action for the Gordon Green Shield team

Hearty congratulations to Bryce Cook on his selection in the AW Green Shield Merit team, following most impressive performances for the Stags in the recent Greenies competition.

A fast bowler, Bryce bowled with good pace and determination throughout the matches, and greatly assisted the team to a most creditable top four finish. Bryce is the younger brother of Connor, who is currently performing impressively in second grade with his off spinners.

Interestingly both brothers were selected in the Australian U16 team, two years apart and are from Kew, near Port Macquarie.

Bryce took 17 wickets during the Green Shield season at 20.76 with a best performance of 5 for 11.

The last Stags player to make the Greenies Merit side was Charles Mitchell, from Lismore, who has recently re-joined the club following the HSC and a bout of glandular fever. Worth mentioning too is captain, Trystan Kennedy, who was desperately unlucky not to make the Merit side this season, following his excellent batting at the top of the order.

The article on the Merit team on the Premier Cricket website is at: