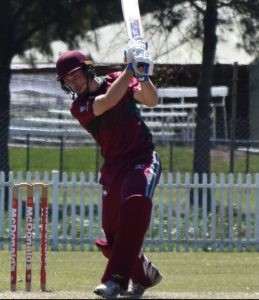 After all the planning and uncertainty, the season 2020-21 has started with only first and second grade playing until the lower grades kick off at the end of October. The Kingsgrove Sports T20 competition however will start on along with the Poidevin Gray in a double header at Waverley Oval on October 11.

The new look first grade team go off to a great start with Jamie Bekis and Taj Brar taking the score to 80 before Jag was out for 30. While Jamie and Taj had set the platform it was time for Tym to accelerate and he certainly did with 9 fours and one six in a score of 70 off 48 balls. Jamie also got in on the act with a well made 68. Max Newman then displayed his undoubted batting talents with a cameo 30 to take the score to 7 for 259 off our 50 overs.

The feeling was, however that they would have to bowl really well as it was an excellent wicket and the Hawks had a strong top order. Unfortunately wickets did fall consistently enough and the Hawks scored 3 for 264 off 46.2 overs to win well.

The second grade side next door at Bensons Lane No. 2 were on a mission to beat the first grade batting total as both sides were on a par with their scoring. Jas Cheema in his first game for the club held the top of the order together with a fine 78 and assisted by Henry Wines (50) Nick Miller (46) and new skipper Darren Jayasekera with 30. The score ended up at 8 for 261 and like first grade next door they were keen to bowl well and get early wickets.

They certainly achieved that with Quincy Titterton starting his Gordon career with two early wickets to have the Hawks at 2 for 10. Veteran Nick Miller and youngster Connor Cook then combined well to put the Hawks middle order under pressure and have the Hawks in trouble at 6 for 87. In his first grade match for the club Connor took 2 for 19 off his 10 overs.

It was then time for Quincy to come back and finish the innings. He did this in fine style taking three more wickets to finish with 5 for 22 with his last wicket coming off the fifth ball of his last over to close out the Hawks innings for 104.

An excellent start for the second graders 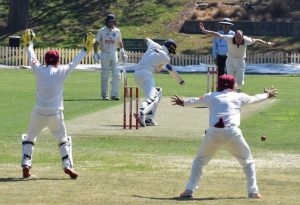 Round 2 vs Sydney Uni

With Tym Crawford losing the toss, the students decided to bat with Tym striking in the first over picking up the edge of Nivethan Radhakrishnan to get the Stags off to a great start.

Another delivery in his second over had the whole ground appealing with Nick Larkin hit low and apparently in front before scoring. With the umpire apparently reaching for his counter to click over the ball count, Tym proceeded to celebrate all the way to the keeper. Unfortunately the umpire didn’t agree with the opinion of the stags fielders and the prize wicket was missed.

Larkin and Ryan McElduff then settled in to take the student to 1 for 137 well into the second session before Ashwin Premkumar was able to secure a false shot from the well settled Larkin.

The wicket seemed to lift the spirits of the team and all the bowlers were able to put the brakes on an innings that could have got to any score with the batting strength of the students. As the pressure grew wickets started to fall with Ryan Meppem and Matt Wright picking up a wicket each to have Uni 4 for 222 at afternoon tea. 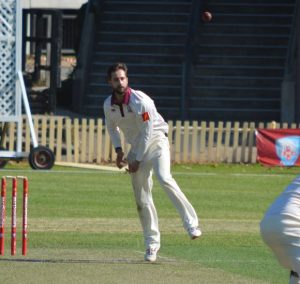 As the GDCC cricket pundits discussed who would come on after tea to maintain the momentum and they summised either the return of the quicks or the continuance of Matt and Ryan, but the skipper had other ideas. He had seen some turn from the couple of overs from Dylan Hunter and gave the ball to Dylan who didn’t disappoint. The important wickets of Robertson, Cummins (who scored 100 against us last year) and Miller put the students on the back foot and a score of around 260 seemed achievable. Some late hitting however brought their score to 286 with Dylan finishing with 4 for 85 off 25 overs and Ryan Meppem taking the last two to finish with 3 for 61.

This was an excellent come back from 1 for 137 and with the openers holding out till stumps the stage is set for an important run chase next week. 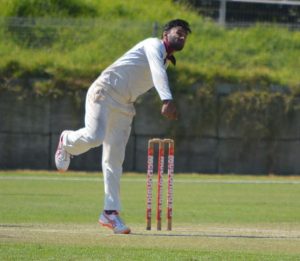 The seconds were also bowling a pleasant walk away at St. Pauls and like their first grade colleagues, the students started well and were 1 for 111 at lunch with Jas Cheema taking the wicket with his drifting off breaks.

A couple of run outs and a wicket to Matt Keevers had the student at 4 for 152 and it seemed the strong bowling performance of last week would continue.  The students, however, had other ideas, with Ryan Danne and former Stag Oli Zannino putting on a partnership of 150 to put the Stags on the back foot.

To his credit Jas Cheema kept plugging away and eventually wickets started to fall and the students were bowled out right on stumps for 358 with Jas taking 6 for 137 off his 27 overs.

A big task next week, but this team will give it a good shot.