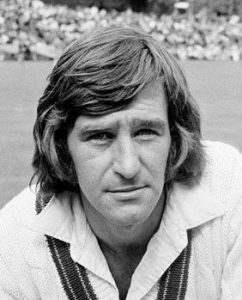 Graeme Watson during 1972 tour of England

Graeme Watson has died in Bowral on 24th April. He had retired to Bowral a few years ago but continued to provide advice in writing and in detail to the Highlands District Cricket Association. A tribute will be written by Rodney Cavalier in the coming days. Graeme played for Gordon over three seasons from 1976 to 1980.

Graeme Watson was an all-round sportsman who played AFL for Melbourne as well as representing three states during his cricket careers. A middle-order batsman and medium-pace bowler, particularly effective on wet wickets where he could cut the ball markedly. He started with Victoria where he quickly secured a regular place and had such a good first full season with bat and ball that he was taken to South Africa where he played three of his five Tests.

In 1969-70 he toured New Zealand, and in 1971-72 moved to Western Australia, being a key part in their Shield-winning teams of 1971-72, 1972-73 and 1974-75. In 1971-72 he was picked for two unofficial Tests against a World XI, opening the batting, but in the second he suffered an horrific injury when hit in the face by Tony Greig. His doctors advised him to retire, but six weeks later he was playing again and was rewarded with a place on the 1972 England tour. He started with 176 against Hampshire and won a place for the first Test, making 0 and 2, and was then dropped until the fifth Test. Overall, he had a good tour.

In 1975 he moved to Sydney for work – he was a marketing executive – and played a few games for New South Wales. In 1977 he signed for World Series Cricket signalling the end of his first-class career.

The following is a tribute to Graeme by Michael Falk

Very sad to hear about Beatle’s passing.  I know he had been ill for a while and had stopped treatment but still a shock.

I played with him in those years he had with Gordon.  He had immense talent both with bat and ball.

One of my first memories of him was at the annual Richmond (or Windsor?) RSL 7-a-side comp.  I think it was his first ‘fixture’ with the club.  It was a stinking hot Sunday morning and we were in a fly-infested changing room about the size of a telephone booth.  He sat down, looked around, and then said, “What the **** am I doing here!”  Very sound question really.   A bit of a change from the SCG or WACA.

On the field he did a couple of brilliant things for Gordon.  I remember a game against Sydney at Chatswood where we’d lost on the first innings and were then set about 180 in two hours.  In those days, that was a very tall order.  Beatle and Marshall opened and the former went ballistic.  He smashed the attack to all parts (I still remember a couple of balls sailing OVER the trees at the southern end!).  We won the game with about 10 minutes to spare for the loss of one wicket and Graeme finished with 106*.

There was another game at Chatswood where we were bowling.  I remember Marshall had said that when things were all in sync, Beatle could bowl very fast (he’d even said that, at the WACA, he could bowl as quickly as any of WA’s long line of fast bowlers).  Well, on this day, he absolutely put the wind up Syd Uni.  He took 8-46 and the batsmen were very happy to leave the centre wicket, most of them battered and bruised.  We loved it!  Uni were rolled very quickly and I think we had an easy win.

A fine cricketer.  Very laid back with a great sense of humour.