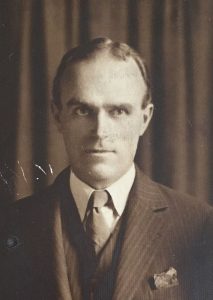 Cliff Geddes after the war

In the writing of my book “A Cricket Club at War”, many of the facts of the war were provided by Gordon cricketer Clifford Mervyn Geddes. The main reason for this was that Cliff kept a record of events in his diary which is available to download from the State Library.

Cliff’s story was one of the exceptional ones during the First World War as he was one of the first to enlist, landed on April 25 at Gallipoli after his boat was sunk, was sent home with a heart problem in January 1916 and returned to the Western front in October 1917, where he saw out the war until his return home in June 1919.

On further research of Cliff’s diary and also his war record in the National Archives, I think our Cliff was also a survivor of the “Spanish Flu” in 1918/1919, even though he may not have known it.

While called the Spanish Flu, the virus did not start in Spain. The fact that Spain was a neutral country during the First World War and hence had no restrictions on its media, the spread and effects of the flu were well known. The first story in Spain was in May 1918 when the King Alfonso XIII was reported to be suffering from the flu.

The first known case in the USA was actually in March 1918 when a soldier was diagnosed in Kansas. Many believe infected soldiers spread the disease to other military camps across the USA and when 84,000 troops travelled to France later that month followed by 118,000 more the following month, the spread continued. Maybe it should have been called “The American Flu”. While 18 million died during World War 1, between 20 million and 50 million died from the disease in the 2 years following. 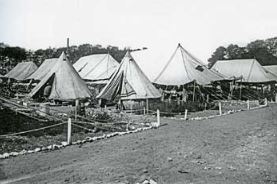 In September 1918 as the war was coming to a close, Cliff, and most of the Australian contingent left in the war, were resting in Rouen after the decimation to their ranks over the prior 3 years.

In a quote from his diary, Cliff wrote:

The Aussies have more than done their bit in this great push ? Just on our own sector prisoners constantly poured back & we advanced a terrific distance since it first began. We have lost some grand men though, part of war’s hellish price. God grant, there may never be another one on this earth! Our brigade are all out for a thoroughly well earned rest, but there are French, English & Yanks galore to carry on the big advance unceasingly & Fritz will get no respite.

I have been very crook lately with diarrhoea & pains in the stomach, & was sent today in a motor ambulance to the 61st Casualty Clearing Station. There are 3 wounded Huns in the ward I’m in, & to complete the mixture, a tall Indian came in. Arrived by hospital train at Rouen, & was taken to No. 10 General Hospital. The advance goes on on all sectors & Fritz is getting the hell he deserves. The whole of the Aussie divisions are to have a long spell, so I won’t be destined to see any more German stoush & fireworks. Our numbers are so small now that I think the heads have brought our chaps out because they’re too weak to carry on without being reorganised & several battalions have been cut out altogether.

It has been reported that the Spanish Flu included the symptoms of nausea and diarrhea, and after Cliff spent 5 days in the 10th General Hospital in Rouen he was transferred the 30kms to the No 11 Convalescent Depot in Buchy.

The next entry in his war record is “Still a patient” at the Convalescent depot on the 15th December, 1918. Cliff mustn’t have got the memo that physical isolation was one of the best treatments, as he was caught being AWOL in Buchy from 19th December, 1918 till 28th December 1918. He had been released from the Convalescent depot on December 18. Buchy was a French village that was well behind the front line during the Battles of the Somme and therefore a popular place for soldiers to visit. 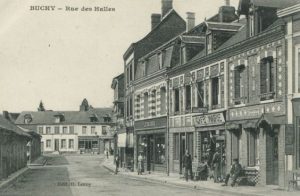 Cliff was found guilty of his AWOL offence and was reduced from Sergeant to Private. He also lost 24 days’ pay. He must have thought it would be worth it.

The good news was that Cliff had recovered and after returning to Chatswood in June 1919, he continued his career with Gordon taking a total of 160 wickets mainly in third grade, which included 61 wickets in his first season back, playing in the third and second grade team as well as the Vets on Sundays. He was keen to catch up on lost time.

Cliff continued playing until 1924 and in the years following Cliff would regularly visit Chatswood Oval. This included after the Second World War, when he would take his teenage son, Geoff, who was playing Green Shield for the club, to the oval to watch the legendary Gordon cricketers, Ginty Lush, Sid Carroll and Jack Potter. During this period, Gordon won two First Grade premierships in the 1945-56 and 1947-48 seasons when crowds of three to five thousand were not unusual.

Tragically one Saturday in late 1947, while sitting near the Macartney Scoreboard at the oval, Cliff suffered a stroke. His distraught son urgently sought medical attention and he was rushed to hospital. Unfortunately, Cliff wasn’t able to recover and he died one month later. I had the privilege of interviewing Geoff in 2015, not long before he died. Geoff said he could still clearly recall that day as if it was yesterday.

Cliff was one of our true Gordon heroes, who not only went to the First World War, but after returning home ill following the horrors of Gallipoli, re-enlisted and returned to the war in France and Belgium.

He simply thought it was his duty.

As Anzac Day approaches and we are unable to physically participate in any commemorations, make sure you remember the Gordon cricketers who fought to maintain the history and traditions of both our great country and our great cricket club.