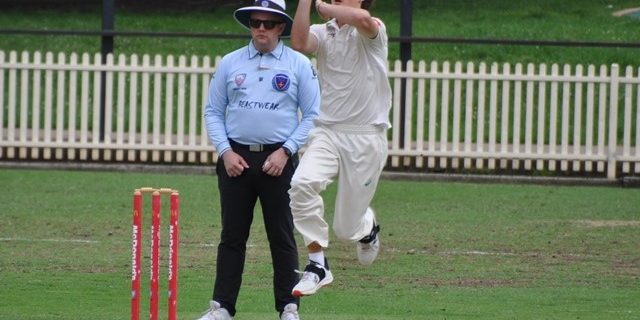 Gordon had 7 players selected to participate in this week’s U19 State Challenge held at the Raby Sports Complex, including Connor Cook, Callum Bladen and Charles Mitchell from our first grade side, Nick Toohey, Luke Callanan and Sam Elder from our second grade side and Bryce Cook from last seasons Green Shield side.

6 teams competed under a slightly altered roster due to 2 x U17 teams being included for the first time. 2 City metro U19, 2 Country/ACT U19, NSW U17 Metro and NSW Country/ACT U17.

Unfortunately, Connor Cook didn’t make the starting line due to a positive test.

Callum Bladen started the week with a customary tidy spell. His combined figures over two days of bowling were 1/34 off 11 overs.

Luke Callanan was one of our U17 reps. He bowled with good speed and tested all batsmen. His combined figures over two days were 5/24 off 10 overs.

Sam Elder faced a tough few days bowling to established batsmen both days and having no luck with the bat.

Charles Mitchell ‘nicked off’ early in two games, but scored an impressive 38 at the top of the innings in a third game.’

Bryce Cook was our other U17 representing Country/ACT. Bryce also started well with 2 wickets in his first game. Combined figures of 2/53 off 10 overs.

Well done to all the above for their selections and flying the Stags flag with pride. The future looks bright for our club with such an array of talent coming through the ranks.

The U19 National Tournament is set down for April in Mackay, North Queensland. Best of luck to these boys in any future selections that may come their way.