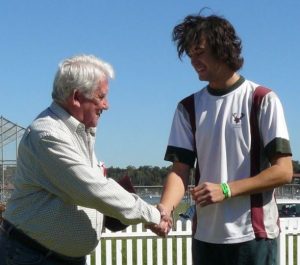 The Gordon District Cricket Club congratulates one of its favourite sons on his election to the NSW Cricket Hall of Fame. Brian’s contribution to cricket in Australia goes back many years and he is a most worthy recipient of this honour.

Brian joined the Gordon District Cricket Club in the 1955-56 season, travelling up from Fairymeadow near Wollongong and playing a few games in the lower grades and Poidevin-Gray. The following season he played First Grade, the second youngest player ever to play First Grade for Gordon.

In 1958-59, he was selected in the NSW Colts team but he didn’t get chosen in the NSW Sheffield Shield team until 1964-65 (it was very tough to break in when you’re a wicketkeeper and there’s only one spot!). In the next ten seasons for NSW, he played 73 matches, making 242 dismissals.

In the 1966-67 season, Brian was selected in the Australian team for the tour of South Africa. He played in all five Tests and, although the Australians were well beaten, Brian’s ‘keeping was exemplary. In 1969-70, Australia went to India and South Africa, an arduous tour with nine Tests in eighteen weeks. They were victorious over India but were again outclassed by a very strong South African side. Brian’s ‘keeping however, was still of the highest standard with 18 dismissals. 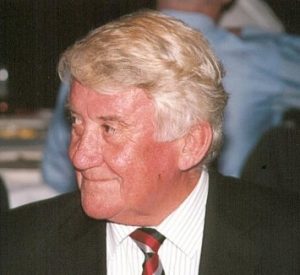 Brian at the Club’s Centenary dinner in 2004

During this time, Brian was appointed captain of the NSW team and in his first game as captain, against South Australia, he equalled the world record for dismissals in a game with 12.

Near the end of his first class career, he was invited to become the National Coaching Director for the Australian Cricket Board and one of his first tasks was to write a National Cricket Coaching manual with Richie Benaud. He also became a NSW selector, a position he filled for 24 years (1975-76 to 1989-90 and 2002-03 to 2010-11), several years as Chairman. In 1979, he was elected a Life Member of the NSW Cricket Association.

Brian was also very involved in coaching and managing the Australian Under 19 team from 1985-86 to 1996-97, taking them on a number of overseas tours as well as looking after them in Australia.

Of course, Brian’s time at Gordon was legendary. He played for twenty seasons, finishing in 1974-75. He also came back and played a few games in 1977-78. He scored four First Grade centuries, perhaps his most memorable in the 1970-71 season where his 129* against Northern District in the semi-final allowed Gordon to save the match and progress through to the final. Brian is also first on the list of wicketkeeping dismissals of the club. He was elected a Life Member of the club in 1979. 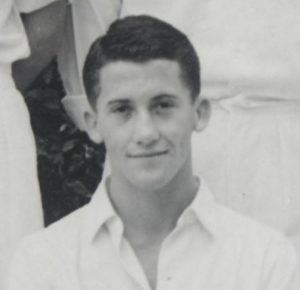 Obviously Brian’s playing career was outstanding – a wonderfully efficient and neat ‘keeper, particularly when standing up over the stumps to spinners, and a more than capable batsman. However, there’s much more to Tabsy/Herbie than just his on-field prowess. As Marshall Rosen said in his nomination speech for this award, “… he is one of the nice guys of Australian cricket, with a very gentle nature and no enemies.” He added that Doug Walters had said, “…Herbie cared about cricketers. He was always prepared to help out players.”

In the excellent book about Brian’s life, written by Ronald Cardwell and David Jenkins, “It’s Not About Me” (the title a reference to Brian’s reserved and modest nature), Brian Booth noted that, “…Brian Taber was a wonderful team man. It was a pleasure to play with such a quality person and sportsman.” Steve Rixon added, “…Without doubt, Tabsy’s legacy was his passion for the game. He wanted you to do the best you could on the field. He never forced you to do things. He was ever the encourager.” Alan Turner suggested, “…He was a steady influence on players, an astute leader and knew cricket inside out. As a coach his abilities were, without question, the best going around.”

Long after his playing and coaching careers have finished, Brian has maintained his interest in the Gordon District Cricket Club. A great man in Australian cricket – well done, Tabsy!

Players of Year named at GDCC Presentation Day
May 8, 2021

Congratulations to Bryce Cook on selection in the Green Shield Merit XII
February 18, 2021
Go to Top