The final summary of GDCC Awards

Thank you to everyone who has followed our 2019-2010 GDCC Awards Presentation. It has been a challenge to keep everything going smoothly and I would like thank Ed Howitt for the time put into producing the videos and keeping the suspense going with the awards.

For those who haven’t caught up with each award, below is a summary. I hope you all enjoyed the awards and we look forward to presenting the actual trophies to the recipients when the time is right.

Player of the Year

The winners both scored 15 points on the voting point score which accumulated during the season and as voted on by the selectors. 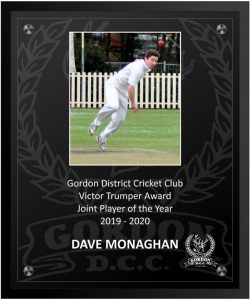 This is the first time Dave has won this award and is a testament to his consistency over so many seasons with the GDCC.

In addition, Dave was the winner of the NSW Premier Cricket 5th Grade captain of the year, which unfortunately wasn’t able to be awarded live due to the lockdown.

Dave’s season comprised off 322 runs when he would come in at various positions in the middle order depending upon the batting strength of his side for that match. He scored three fifties and contributed to many of the teams wins.

In the bowling, Dave is renowned for knowing when to come into the attack and get that vital breakthrough. He took 23 wickets at 16.48

Congratulations Dave on an excellent season. 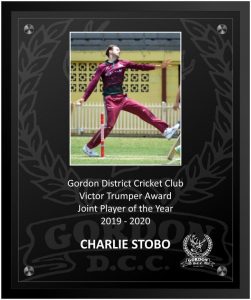 This is Charlie’s second award for the season after taking out the Brian Taber award for Best all round performance. He was near the top of the standings during the season, but his excellent double against Northern Districts put him in the lead, before Dave Monaghan made a late run to tie his points tally.

During the season, Charlie took 29 first grade wickets as well as scoring 334 runs. Charlie of course is well known for his bowling skills, however a new found confidence in his batting saw him come in at No. 7 for the first-grade team and often when the team was in trouble. An example was the match against Northern Districts where Charlie came in with the score at 5 for 128. He scored a well-made 53 and helped take the side to a score of 265. Charlie then took 5 for 58 in the ND’s innings to help bowl Gordon to victory by a mere 7 runs.

Charlie bowled well in every match he played often pinning down the batsmen to force a wicket a lot of times at the other end. In addition to his 5 wickets against ND’s he also took 4 wickets against Blacktown and 3 wickets on four other occasions.

Congratulations Charlie on an excellent season.

Player of the Year Top 10 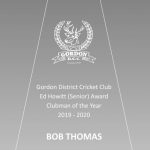 The Clubman of the year is Bob Thomas.

Bob sneaks around from ground to ground watches the cricket but tries to stay away from the “politics” of the club. He is our Director of Junior Development on the executive, club selector and it was Bob that did a lot of chasing to try and get our 6 teams on the field each week.

However, it is the work he has done in building our relationship with the country that has seen us have many country players come to the club over the past few years. It is not just a matter of contacting them, but talking to their parents and ensuring Gordon will look after these players when they come to the city. He has done an exceptional job.

The Young Clubman of the year is Tym Crawford. 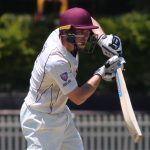 Tym is a past winner and has again made an immense contribution to the club this season. Tym took over as captain of 1st Grade this season and his performances were exceptionally good. Tym also ran our Junior Academy and coached our Green Shield team last season and was heavily involved in our social media area. Tym always is happy to help out the club, and provides insightful feedback to our members.

The Young Clubman award is sponsored by JP Gavan 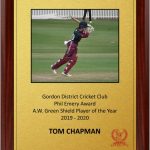 In his second year of Green Shield for the Stags, Tom enjoyed much success, both as a wicketkeeper and top order batsman. In the seven matches played, Tom scored 246 runs, with a top score of 115, and an average of 35.1. As well as his polished batting, Tom’s wicketkeeping was of the highest order. With 10 catches and 4 stumping, he was deservedly rewarded with selection in the U16 State Challenge for the Metropolitan Sixers team.

Apart from Green Shield representation, Tom also played four grade matches for the Stags. He impressed all with his keeping ability and tenacious batting, particularly in his deserved third grade appearance.

The Dick Guy award for Under 21 performances goes to Nathan Doyle. 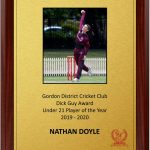 Nathan had an excellent debut season for the Stags playing first grade throughout the season and captaining the Poidevin Gray team. Nathan was also awarded the 2019 Bradman Scholarship award priding him with financial assistance for the university degree. 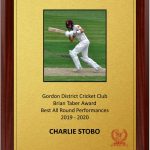 Charlie has won this award for his performance in taking 29 first grade wickets as well as scoring 334 runs. Charlie of course is well known for his bowling skills, however a new found confidence in his batting saw him come in at No. 7 for the first-grade team and often when the team was in trouble. An example was the match against Northern Districts where Charlie came in with the score at 5 for 128. He scored a well-made 53 and helped take the side to a score of 265. Charlie then took 5 for 58 in the ND’s innings to help bowl Gordon to victory by a mere 7 runs. 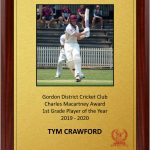 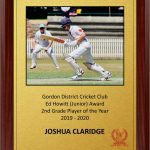 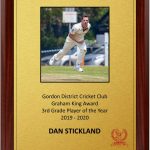 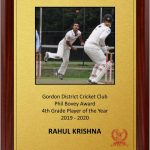 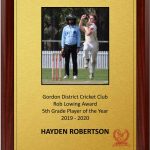 Hayden had an excellent season taking 30 wickets at an excellent average of 11.67 with his medium fast deliveries.
Hayden took 4 for 39, 4 for 31 and 4 for 25 in the last three games before the final round was washed out.

500 runs or more for the season

Nathan Doyle and Josh Claridge had a partnership of 225 for the 4th wicket in the match vs Sutherland on December 15. Nathan scored 129 off 123 balls and Josh 10Nathan and Josh were only 8 runs behind the highest ever partnership for any wicket in PG’s of 231 between Steve Colley and Reece Bombas in 2008 against Northern Districts.