In the past couple of weeks, Gordon has lost two significant past members.

The first was Don Harkness, who played for the club from 1950 to 1959.  He played mostly First Grade where he took 139 wickets as a fast medium bowler.  He was also a hard-hitting batsman who scored quite a few handy runs.  In all grades, he scored 1734 runs and took 192 wickets for the club.  He took 5 or more wickets in First Grade five times (with a best of 8-52 against Cumberland) and captain Sid Carroll said in the 1958-59 Annual Report, “He is a player no First Grade side can do without.”

He also shared an opening partnership of 206 in the Poidevin-Gray Shield with Ken Eastwood in 1951-52.

In the 1954 season, he went to England and played 13 matches for Worcestershire with some success, including a score of 163 against Cambridge University.

After playing for Gordon he went on to play for St George and then Sutherland where he was an inaugural member of their First Grade team under the captaincy of Norm O’Neill.

The second sad loss was Marjorie Evans.  She was the wife of David Evans, who played for the club both before and after World War Two, also serving on the committee for a long period.  When son, Greg, joined the club in the late 70s, David became the First Grade scorer and manager and continued in that role to 2000, a fantastic contribution to the club.  Greg played a number of years, predominantly in First Grade.  For all this time, Marjorie was a wonderful support to David and Greg.  She was there for most matches and offered quiet encouragement as the team ‘mum’ as well as helping with afternoon teas and other odd jobs.  Her presence was always appreciated.  She still attended Annual General Meetings until quite recently.

A warm, cheerful and friendly person, Marjorie will be sadly missed by many club members who played in teams with Greg and David.  She reached her century, having turned 100 late last year – a great club member and supporter. 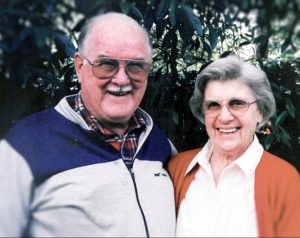 The Gordon District Cricket Club offers their most sincere condolences to both the Evans and Harkness families.